What do you do when you face a challenging situation?

I tend to mull it over and over until a kernel of an idea forms that leads to something that might be a solution. To get there, I talk and discuss with everyone around me until they engage in finding that solution. I gather information. I want to know why it’s challenging. Why has it presented itself? What are the issues? What are possible solutions? And then, in collaboration with others or on my own, I decide on a pathway to what is hopefully a satisfactory resolution.  And that often leads to surprising results.

Challenges about mothering led to development of a MAMMA newsletter, TV series, mini-conferences and workshops.

The five cousins who ignited the idea for MAMMA.

Those initiatives began with discussions I had with my sister-in-law Marlene whose children were the same age as mine and  sick. Each of my three kids at that time were in the midst of taking turns with chicken pox over the course for six weeks. Hers had croup. We were completely isolated in our homes. No friends over to visit. What saved us from going nuts was our dial up telephone. In our discussions, we recognized that our situation was universal: moms at home had little to no support system.

We bandied about the idea of starting an entity that would address real issues of motherhood. We approached a municipal government organization offering family services about distributing a survey asking moms to indicate their interest in participating in and contributing to what we assumed would be a regular newsletter. Very supportive, the organization’s committee agreed. Response was considerable – and positive. We decided on an unwieldy, yet appropriate name: Modern Activities for Mothers’ Mental Awareness. We wrote articles, invited contributors to write, typed, copied and collated our first MAMMA issue.

Each family member, from grandparents to children, took turns at folding and stapling each newsletter

Eventually, MAMMA became a quarterly publication, edited and designed by professionals, sent to the presses for printing, and mailed to subscribers across the nation and around the world. One issue included a Directory to Home Party and Services that led to a Home Party  feature by Financial Post Magazine. A journalist with a copy of MAMMA asked to interview us and some of the home party business owners mentioned in that issue.

After capturing the attention of local and then national media, we were contacted by the director of a small cable company about the idea of a taped half hour weekly cable show along the lines of our publication. We were excited to take on the challenge.

That gig in turn led us to pitch the idea to a major cable company of an hour long, live, interview and phone in show, once again ‘wo’manned by local volunteers.

We became a phenomenon, especially after the airing of an interview with our camera woman – a last minute guest who – til then, it turned out, had received the largest divorce settlement  in the history of Canada! (How well do we know the people who cross our lives?) 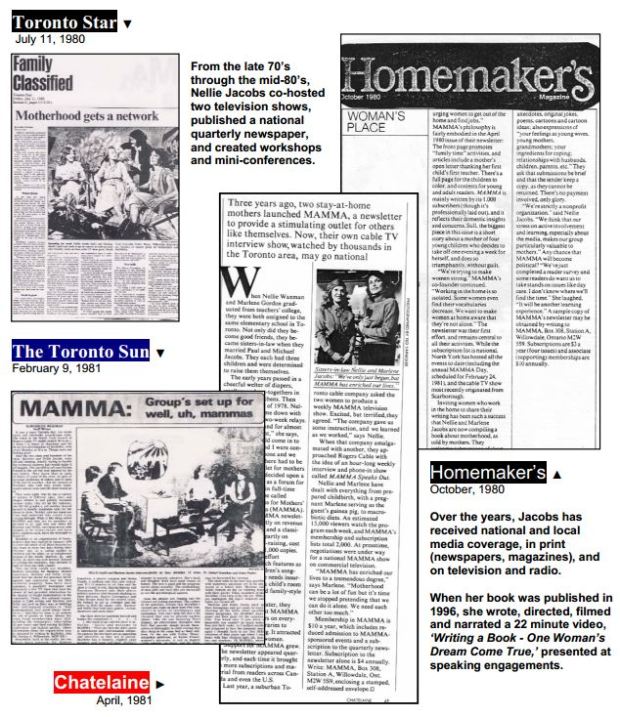 You never know when the solution to a problem can lead to wonderful results you never considered. You just have to take the leap.

Another example: GRADING THE TEACHER: A PARENT/TEACHER GUIDE

Challenges about my children’s education motivated me to writing a proposal for an article in one of our local newspapers. It was turned down as not suitable for that publication by the editor – with the suggestion that I expand it into a potential article for a national magazine. With that in mind, I created a report card to send with my proposal to another newspaper. That became the focus of a full page focusing on evaluating teachers, using some of the points in my report. (See the Toronto Sun headline “Marking the Teacher” in the photo below.)

The editor there suggested I use the report as the source of a book.

That led to writing an outline, submitting a proposal, taking on a New York agent, being turned down by 28 publishers, and then contacted by Penguin Books Canada!

My book Grading the Teacher became a best seller worldwide. And … as well as by most major local and national media across the country, it was featured on page two of the newspaper by the very first editor I approached with my proposal for an article!

Have you taken risks overcoming challenges that led to surprising results? Share your story…

In the next post, I will describe the background of a completely new initiative I’ve just previewed this past week. Here’s a sneak look:  https://www.facebook.com/NellieJacobsSunnySideUp

Like Loading...
This entry was posted in creativity and tagged challenges, Grading the Teacher, inspiration, MAMMA, parenting. Bookmark the permalink.